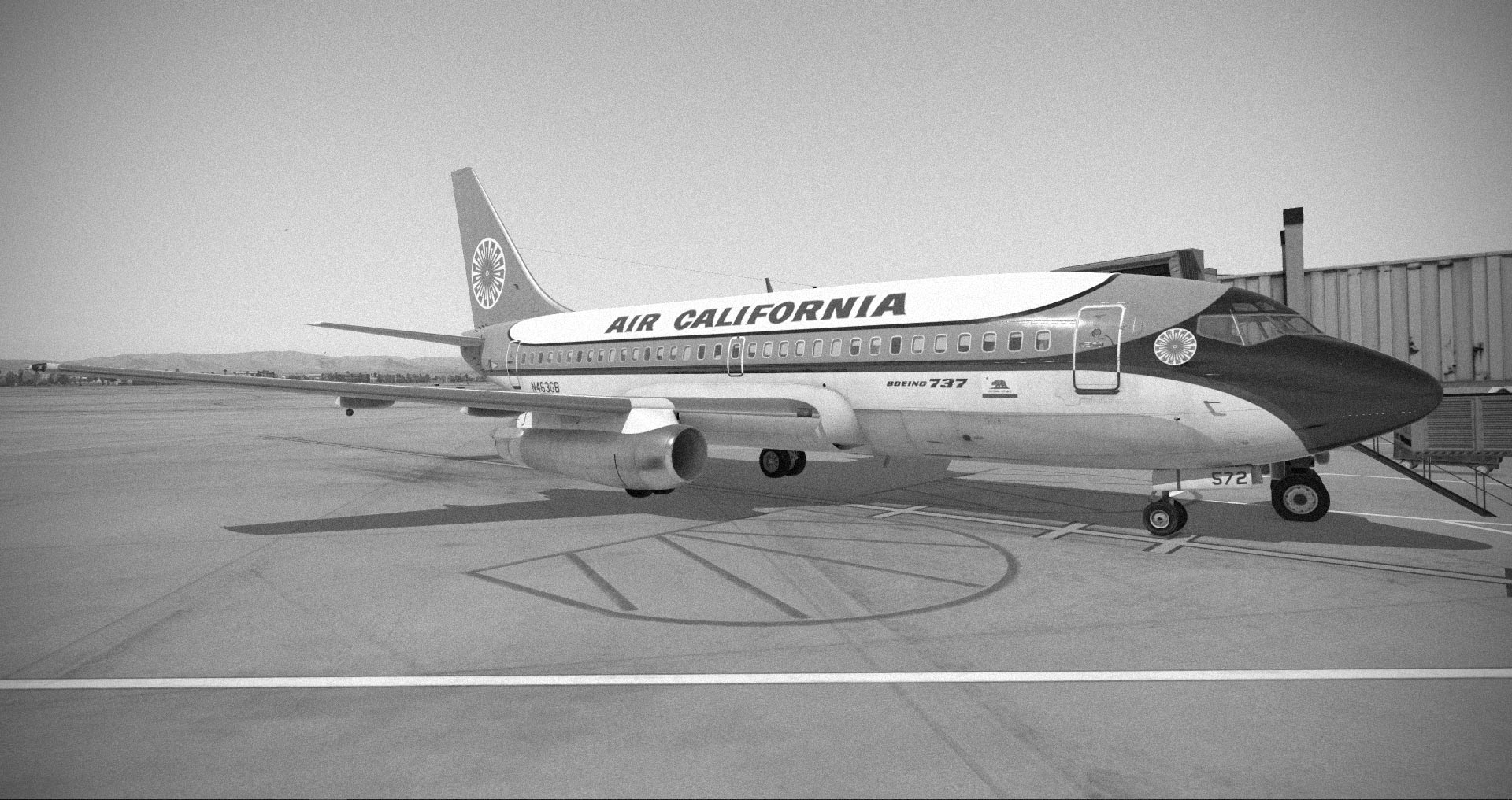 What about the best Virtual Airline in the World ?

By May 1968, the airline was operating 92 flights per week from SNA to SFO, primarily using Douglas DC-9-10 twin jets, as well as 50 flights a week from SNA to SJC, with most continuing on to OAK. By January 1969, Boeing 737s had taken over all flights, with the Electras and DC-9s being removed from the fleet.

In 1975, Air California resumed flying Lockheed Electra propjets in order to serve Lake Tahoe Airport since this airfield had banned scheduled passenger airline jet flights (a ban lasting until the early 1980s. Pacific Air Lines had operated Boeing 727-100s into Lake Tahoe for a short time in 1966-67.) The Electras were retired again when Air California dropped Lake Tahoe as a destination in 1979, with the airline then becoming an all-jet air carrier for the remainder of its existence (several of the last Lockheed Electras in scheduled U.S. passenger service were also operated by Pacific Southwest Airlines (PSA), which also ceased operating the Electra into Lake Tahoe at this time.)

The airline changed its name to AirCal and recommenced flights to Lake Tahoe in the early 1980s with jet service, first with McDonnell Douglas MD-80s and later with Boeing 737-300s. In early 1985, the airline was operating nonstop MD-80 jet service between Lake Tahoe and Los Angeles (LAX), San Francisco (SFO), and San Jose (SJC).

In the early to mid-1970s, Air California offered school field trips for inner-city school children in Los Angeles to Sacramento at $25 per ticket. The school children would be taken on a tour of the California State Capitol, Governor’s Mansion, and Sutter’s Fort.

When the airline introduced the new McDonnell Douglas MD-80, one could (for several hours at Burbank Airport) purchase discounted one-way passes (good for one year) for flights to San Jose and Oakland. The pass price was $9.80 one way/$19.60 round trip, with a purchase limit of four round-trip passes. Later that year, San Francisco was added to the pass program as well.

Following the federal Airline Deregulation Act of 1978, Air California started flights to Las Vegas and Reno, its first routes outside of the state. It then offered service to Portland, Oregon, and then Seattle, Washington, and Phoenix, Arizona. The growing airline then became a takeover target for larger, national air carriers.

In 1981 the airline changed its name to AirCal and adopted a bright new logo and image, including a new wardrobe for its employees by fashion designer Mary McFadden.

AirCal served as the title sponsor of the 1982 CART Indy car race at Riverside International Raceway.

During the 1980s, AirCal had a small fleet of Boeing 737s (series -100, -200 and -300 aircraft); seven McDonnell Douglas MD-80s; and six British Aerospace BAe 146-200s. (MD-80s and BAe 146s were also operated by California intrastate rival Pacific Southwest Airlines, another intrastate carrier that had expanded passenger service outside of California on some of the same routes.) The BAe 146 allowed AirCal to increase flights at noise-sensitive Orange County Airport since this British-built jet was quieter than other jets.